I became very intrigued by yogurt when I read Michael Pollan’s book entitled, Cooked: A Natural History of Transformation. One of the topics was fermentation, the process of transforming food using microbes. In addition to transforming simple ingredients into delicious foods, these microbes may also offer a health benefit themselves. In the book, Michael Pollan states:

Medical researchers are coming around to the startling conclusion that, in order to be healthy, people need more exposure to microbes, not less; and that one of the problems with the so-called Western diet —besides all the refined carbohydrates and fats and novel chemicals in it— is the absence from it of live-culture foods. The theory is that these foods have a crucial role to play in nourishing the vast community of microbes living inside us, which in turn plays a much larger role in our overall health and well-being than we ever realized.

I had been eating Greek yogurt for quite some time, but I didn’t like the taste- I had to get the flavored ones to deal with the sourness. After reading the book, and being told by some friends that making yogurt was quite easy, I decided to give it a try. It turned out well- it was delicious and very creamy without any sugar or any other additives. I could also make it with organic whole milk- that way I wasn’t resigned to eating the 0% fat Greek yogurt that was sold in the store. It was also cheaper to make than to buy organic yogurt.

I eventually decided to buy an incubator to make yogurt production more efficient (warmth is necessary for faster production, and my kitchen was generally pretty cold). I purchased the Euro Cuisine Yogurt Maker. I wish I had paid the extra money for the one with the automatic shut-off feature that shut off the incubator after a certain amount of time.

I’ve added below the recipe for making yogurt with or without a yogurt maker. It’s pretty simple! And a great way to add healthy fermented dairy to your diet (see the benefit of fermented dairy in my previous post). 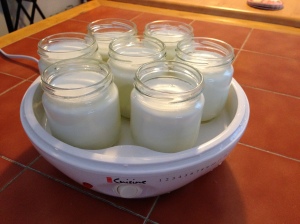 Then voila, your yogurt should be done! Store it in the fridge- keeps for about a week or two at least. Enjoy!